In 2012, due to the national and international economic situation, the REPTILIA magazines in Spanish, English and Italian languages ​​were forced to indefinitely suspend the publications. Until then, had been published a total of 92 journals in Spanish, 79 in English and 36 in Italian. Currently the German edition is still being published.

REPTILIA began to be published in 1994, with a bimonthly periodicity and 96 full-color pages. It was advised by a large team of technicians, made up of notable experts in herpetology. Its basic aims were to show information on the various aspects related to the keeping in captivity of terrarium animals, to introduce the natural history of terrarium animals in order to better understand their needs, encourage breeding and repopulation, provide a reliable and easy veterinary orientation to be understood by amateurs and professionals, to offer information on legislation and conservation, demystify the world of these animals through knowledge of their relationship with different cultures, serve as a bond of unity among those interested in the topic … It was adressed to all the terrarium animals fans, breeders, herpetologists, zoologists, paleontologists, veterinarians, naturalists, traders and professionals, as well as all nature lovers in general.

In 2003, REPTILIA EDICIONES begins to publish books in Spanish, characterized by their quality in content and signed by recognized national and foreign herpetologists. At present, the editorial fund consists of 25 books in Spanish and 2 in Italian. 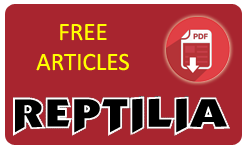